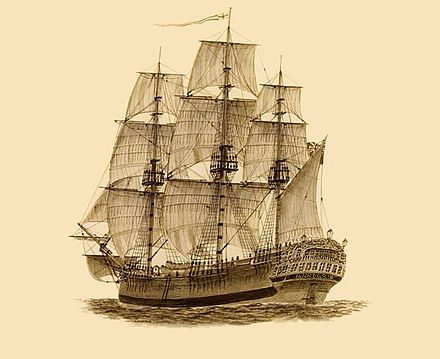 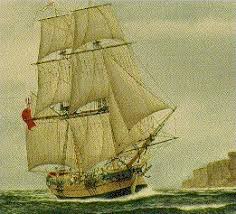 The convict ship Mandarin sailed from Spithead Pourtsmouth on 25th February 1840 bound for Van Diemen’s Land (Tasmania).  On board were the Chartist leaders John Frost, Zephaniah Williams and William Jones whose death sentences for High Treason had been commuted to transportation after a public outcry. The Mandarin was a 425 ton S-rigged sailing ship built by Horton in 1834 captained by James Muddle.  Altogether there were 212 convicts were on board , being transported for offences ranging from attempted theft of handkerchiefs to manslaughter.  According to many sources transportation was considered a very severe punishment for many of the prisoners who by today’s standards had committed relatively minor offences.

John Frost later wrote about his experiences on board the Mandarin: “By degrees I gained strength, and with an increase of strength came an increase of resolution to bear my sufferings with patience and firmness. One day, when the ship was tossing about, I had before me a pretty tough piece of convict beef ; had hold of the partition with one hand, and I was attempting to cut the beef with the other, when I heard a chuckling above me. I looked up and saw the old boatswain laughing at me, ‘ Ah, Mr. Frost,’ said he, ‘ this voyage will be worth a thousand a-year to you; it will teach you something of life.’

On a previous voyage, 14 deaths occurred on the Mandarin caused by suffocation, exhaustion from sea sickness, apoplexy, phrenitis and convulsions, so the job of Alexander McKechnie, the ship’s surgeon, was an important one in keeping the convicts alive during the voyage, and on this trip, however, only one person died.  Dr. McKechnie.kept detailed medical notes about the convicts illnesses:-

More information can be found about the conversations of Dr. Alex McKechnie on board the Mandarin can be found in Les James’ book, “Render the Chartists Defenceless”.

After 126 days at sea on board the Mandarin, the convicts reached their destination of the penal colony at Port Arthur, Tasmania, after a journey of over 12,000 nautical miles, arriving on 30th June 1840.

CLICK HERE TO SEE INFORMATION ABOUT THE PENAL COLONY AT PORT ARTHUR – “a machine to grind rogues honest”.

Between 1788 and 1852, a total of about 1,800 Welsh convicts were transported to Australia – about 1.2% of the total number of convicts transported there by that time.

2 thoughts on “The Convict Ship Mandarin”