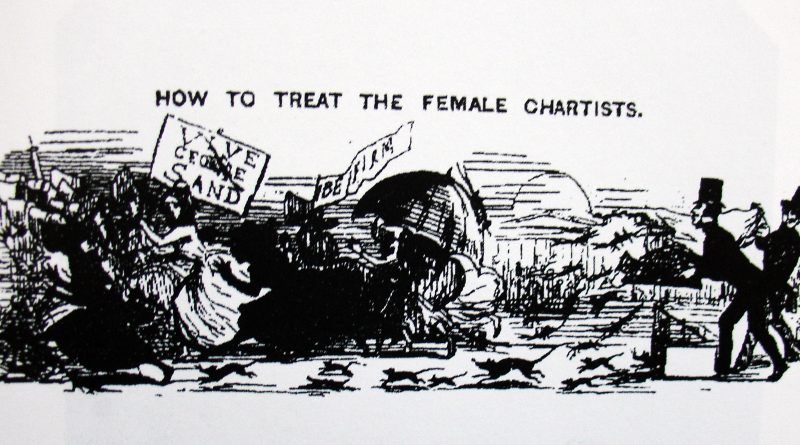 Elizabeth Pease, the daughter of Joseph Pease and Elizabeth Beaumont, was born in 1807. In her early twenties, Elizabeth Pease became the leader of the Women’s Abolition of Slavery Society in Darlington. In March 1838, Elizabeth joined with Jane Smeal of Glasgow, to publish a pamphlet, Address to the Women of Great Britain, where they urged women to organise female anti-slavery associations. Elizabeth also believed that anti-slavery movement should allow women to speak at public meetings.   Elizabeth supported the campaign for the 1832 Reform Act which enabled her father, Joseph Pease, to become Britain’s first Quaker member of the House of Commons. However, unlike most middle-class reformers, Elizabeth was not satisfied with this measure and along with her close friend, Anne Knight, became a supporter of the Moral Force Chartist movement.   Elizabeth Pease was in close contact with the Chartists in Darlington and helped to distribute their literature. In a letter to her friend, Anne Warren Weston, Elizabeth pointed out that some of her friends considered her to be “ungenteel” and “vulgar” because she was a supporter of universal suffrage.   Elizabeth, the most radical of the Pease family, believing that most of the problems afflicting British society was due to “class legislation”. She supported workers who went on strike and defended workers who attacked factories in Lancashire and Yorkshire in 1842.   Elizabeth a member of the Peace Society and the Temperance Society also took part in the anti-vivisection campaign. In 1853 Elizabeth married John Pringle Nichol, the professor of astronomy at theUniversity of Glasgow. As Nichol was a Presbyterian, Elizabeth was expelled from the Society of Friends. After marriage, Elizabeth moved to Edinburgh where she lived until her death in 1897.

Jane Smeal, the daughter of William Smeal, a Quaker tea merchant from Glasgow, was one of the leading figures in female the anti-slavery movement. Jane joined with Elizabeth Pease to help women form their own anti-slavery societies. Jane established the Glasgow Ladies Emancipation Society whereas Elizabeth created the Darlington Ladies’ Anti-Slavery Society. By 1837 there were eight of these women’s groups.  In March 1838, Jane joined with Elizabeth Pease, to publish a pamphlet, Address to the Women of Great Britain, where they urged women to form female anti-slavery associations to speak at public meetings.  In the 1840s, Jane, along with her close friends, Elizabeth Pease and Anne Knight, were supporters of the Moral Force Chartist movement.

Anne Knight, the daughter of William Knight, a wholesale grocer, was born in Chelmsford in 1781. Anne’s mother was Priscilla Allen, the daughter of William Allen, a London brewer, a well-known radical and Nonconformist. The Knight family were members of the Society of Friends and were pacifists and also took an active role in the Anti-Slavery and Temperance campaigns.   By 1830 Anne was deeply involved in the Quaker attempt to end slavery. In Chelmsford she organised petitions, distributed literature and arranged public meetings. Anne also formed a branch of the Women’s Anti-Slavery Society in Chelmsford. Anne frequently travelled to London where she worked closely with Thomas Clarkson. In 1834 Anne Knight toured France where she gave lectures on the immorality of slavery. Knight argued for the immediate abolition of slavery without compensation. Later, her contribution to the anti-slavery campaign was recognised when a village for Jamaican freed slaves was named Knightsville.  Knight also became active in the Chartist movement. However, she became concerned about the way women campaigners were treated by some of the male leaders in both the Chartist and Anti-Slavery organisations. Anne was furious when there were attempts to stop some women delegates taking part in the World Antislavery Convention held in London in 1840. The behaviour of the male leaders at the World Anti-Slavery Convention inspired Knight to start a campaign advocating equal rights for women. This included having gummed labels printed with feminist quotations that she attached to the outside of her letters. In 1847 she published what is believed to be the first ever leaflet on women’s suffrage.  At a conference on world peace held in 1849, Anne Knight met two of Britain’s reformers, Henry Brougham andRichard Cobden. She was disappointed by their lack of enthusiasm for women’s rights. For the next few months she sent them several letters arguing the case for women’s suffrage.  Knight also attacked Chartist leaders who argued that the class struggle was more important than the struggle for women’s rights. In a letter published in the Brighton Herald in 1850 she demanded that the Chartists should campaign for what she described as “true universal suffrage”. The following year Knight established what is believed to have been the first association for women’s suffrage. Their first meeting was held in Sheffield in February, 1851. Knight, who never married, spent the last few years of her life in Waldersbach, a small village south-west of Strasbourg. Anne Knight died on 4th November, 1862.