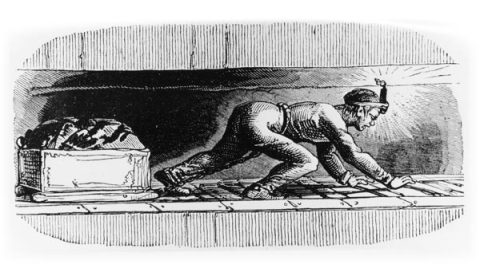 Victorian Child Labor and the Conditions They Worked In

The follow conclusions in regard to Ironstone mines, blast furnaces, underground labour in tin, copper lead, and zinc mines, etc.]

From the whole of the evidence which has been collected, and of which we have thus endeavoured to give a digest, we find – in regard to COAL MINES-

When we consider the extent of this branch of industry, the vast amount of capital embarked in it, and the intimate connection in which it stands with almost all other great branches of trade and manufacture, as a main source of our national wealth and greatness, it is satisfactory to have established, by indubitable evidence, the two following conclusions:-

There is, however, one case of peculiar difficulty, viz., that in which all the subterranean roadways, and especially the side passages, are below a certain height, by the Evidence collected under this Commission, it is proved that there are coal mines at present in work in which these passages are so small, that even the youngest Children cannot move along them without crawling on their hands and feet, in which unnatural and constrained posture they drag the loaded carriages after them; and yet, as it is impossible, by any outlay compatible with a profitable return, to render such coal mines, happily not numerous nor of great extent, fit for human beings to work in, they never will be placed in such a condition, and consequently they never can be worked without inflicting great and irreparable injury on the health of the Children.

3 thoughts on “Report of the Children’s Employment Commission 1842”