“…I was frightened for someone had stolen my bread and cheese. I think it was the rats.”

Until the mid-nineteenth century, the British state accepted that children as young as five years old were an acceptable part of the industrial workforce.

Not only management accepted the position but many parents as well. Change had to come and an investigation into the employment of children was begun. Between 1840 and 1842, government inspectors visited the Welsh coalfields and spoke to many child miners. These interviews were presented to Parliament as part of The Commission of Enquiry into the State of Children in Employment. This report not only tells of the horrific conditions that children worked under but also paints a vivid picture of their everyday lives.

Coalmines in this period were cramped, poorly ventilated and highly dangerous.  There was little attention paid to health and safety and children were injured or killed by explosions, roof falls or being run over by carts.  Children performed a number of important tasks underground – door keepers, who operated the ventilation doors to let coal carts through, drammers, who pulled coal carts to and from the coal face, colliers’ helpers who assisted the actual coal cutting, usually alongside their fathers or older brothers, and drivers who led the horses which pulled wagons along the main roadways.  Even the simple matter of getting to their place of work was sometimes highly dangerous. Many mines were ‘drifts’ driven into the mountainside and children could walk in, others were shafts, which were served by winches or steam engines. The mines in the Llanelli area were up to 500′ deep and had to be descended into by baskets or ladders.

Philip Philip, aged 10, from Brace Colliery in Llanelli, was accustomed to the dangers of ladders: ‘I help my brother to cart. I can go down the ladders by myself. I am not afraid to go down the pit.’  The inspector who interviewed Philip climbed down these ladders with difficulty. Unlike Philip, he was afraid of the noise and the heavy pumping rods that were very close to the ladders.

All alone in the dark

Mary Davis was a ‘pretty little girl’ of six years old. The Government Inspector found her fast asleep against a large stone underground in the Plymouth Mines, Merthyr. After being wakened she said: ‘I went to sleep because my lamp had gone out for want of oil. I was frightened for someone had stolen my bread and cheese. I think it was the rats.’

Susan Reece, also six years of age and a door keeper in the same colliery said: ‘I have been below six or eight months and I don’t like it much. I come here at six in the morning and leave at six at night. When my lamp goes out, or I am hungry, I run home. I haven’t been hurt yet.’

A coal mine was a dangerous place for adults, so it is no surprise that many children were badly injured underground.

Phillip Phillips, aged 9, Plymouth Mines, Merthyr   “Nearly a year ago there was an accident and most of us were burned. I was carried home by a man. It hurt very much because the skin was burnt off my face. I couldn’t work for six months.”

William Skidmore, aged 8, Buttery Hatch Colliery, Mynydd Islwyn  “I got my head crushed a short time since by a piece of roof falling…”

John Reece, aged 14, Hengoed Colliery  “…got my legs crushed some time since, which threw me off work some weeks.”

Some children spent up to twelve hours on their own. However, Susan Reece’s brother, John, worked alongside his father on the coalface:-  ‘I help my father and I have been working here for twelve months. I carry his tools for him and fill the drams with the coal he has cut or blasted down. I went to school for a few days and learned my a.b.c.’ John Reece, aged 8, Plymouth Mines, Merthyr

Philip Davies had a horse for company. He was pale and undernourished in appearance. His clothing was worn and ragged. He could not read:-  ‘I have been driving horses since I was seven but for one year before that I looked after an air door. I would like to go to school but I am too tired as I work for twelve hours.’  Philip Davies, aged 10, Dinas Colliery, Rhondda

Drammers pulled their carts by a chain attached at their waist. They worked in the low tunnels between the coalfaces and the higher main roadways where horses might be used. The carts weighed about 1½cwt. of coal and had to be dragged a distance of about 50 yards in a height of about 3 feet.

Edward Edwards, aged 9, Yskyn Colliery, Briton Ferry  “My employment is to cart coals from the head to the main road; the distance is 60 yards; there are no wheels to the carts; I push them before me; sometimes I drag them, as the cart sometimes is pulled on us, and we get crushed often.”  For this a drammer would earn about 5p a day. 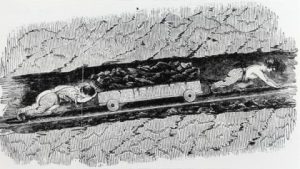 The Dowlais iron works also owned iron and coal mines; they were the largest in the world at this time and supplied products to many parts of the world. However, they still relied on children for their profits. Three sisters worked in one of their coal mines:-

“We are doorkeepers in the four-foot level. We leave the house before six each morning and are in the level until seven o’clock and sometimes later. We get 2p a day and our light costs us 2½p a week. Rachel was in a day school and she can read a little. She was run over by a dram a while ago and was home ill a long time, but she has got over it.”

The publication of the Report and the ensuing public outcry made legislation inevitable. The Coal Mines Regulation Act was fina 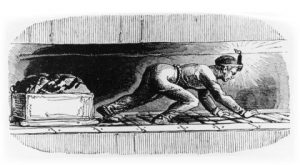 lly passed on 4 August 1842. From 1 March 1843 it became illegal for women or any child under the age of ten to work underground in Britain.

There was no compensation for those made unemployed which caused much hardship. However, evasion of the Act was easy – there was only one inspector to cover the whole of Britain and he had to give prior notice before visiting collieries. Therefore many women probably carried on working illegally for several years, their presence only being revealed when they were killed or injured.

The concept of women as wage earners became less acceptable in the mining industry as the years went by. However, a small number of female surface workers could be found in Wales well into the twentieth century. In 1990 the protective legacy was repealed and after 150 years women are once again able to work underground.