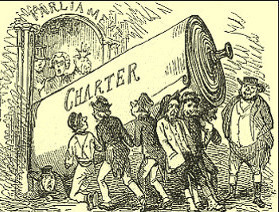 On a cold wet November night in 1839, crowds of people gathered on the hillsides of Monmouthshire in south east Wales waiting to march to Newport. Some were scared stiff, others were in the mood for fighting, and all of them, due to the heavy downpour of rain, were soaked. These ordinary folk were known as Chartists because of the petition called “The People’s Charter” they had sent to Parliament earlier in 1839.  Over 1 million people from all over Britain had signed The People’s Charter asking Parliament to give ordinary people the right to vote.

They wanted to vote so they could elect Members of Parliament who would make things fairer for ordinary people.  The law was made by Members of Parliament who were voted into power by very few people who were allowed to vote because they owned land and property. And the way MP’s were elected was unfair and so laws were made to suit the landowners and not the rest of the people. In Wales at this time only 15% of males (1 man in 7) had the vote. Women were not allowed to vote.

At that time there were a lot of injustices, and people were becoming fed up and wanted a change, so many people because the Chartists.  They were fed up of the very low wages to the men who would be sacked if they complained.  And because wages were so low, it was normal for children as young as six to be sent out by their parents to work in factories and mines so their family had enough money to eat.  They were fed up with being forced to shop in the Factory Shop where prices were extremely high.  There were fed up with unfair taxes which had to be paid at toll gates and turnpike roads.  They were fed up with paying tithe taxes.  And they were fed up that

All these things, said the Chartists, were unfair, and they demanded the right to vote so that new laws could be made by Chartist MP’s to make things fairer.  They were standing up for Justice and Truth.

In 1839 Parliament ignored the Chartists’ People’s Charter petition and so marches were held and speeches made and the Chartists gathered on the hillsides of Gwent planning to march on Newport.

CLICK HERE to find out more about The People’s Charter 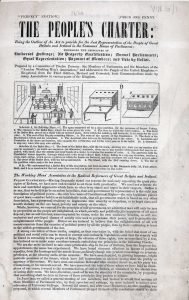 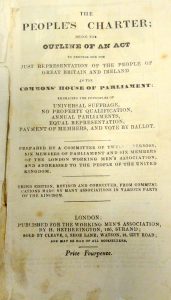 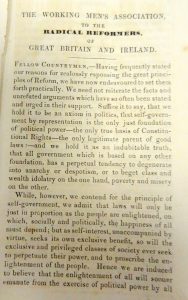