Margaret Haig Thomas was born on 12 June 1883 in London. Her parents were David Alfred Thomas, first Viscount Rhondda, and Sybil Haig, and is remembered as a Newport Suffragette and activist who attempted to blow up a post box with a home-made bomb.

Until 1929, women under the age of 30 in Britain were not allowed the same voting rights as men. The suffragettes were a powerful force for Votes for Women, but progress was slow. During World War One it became necessary to draw upon the resources and skills of Britain’s women, a necessity which in turn led to increased pressure on the government as more women began to grow restless and long for a voice of their own, on an equal footing to the men they had worked alongside in times of hardship.

Thanks to the sacrifice, struggle and dedication of the Suffrage movement, many women began to take their first steps into an ongoing struggle for equal rights. The movement was strong in Wales, with the Cardiff branch of the National Women’s Union of Suffrage Societies being the largest outside London. One of the incredible women to use her power and influence to help achieve political equality for women was Margaret Haig Mackworth of Llanwern House in Newport.

Margaret Haig Thomas, or Lady Rhondda, was one of Wales’ most prominent and active women in the Suffragette movement and, even today, represents the voice of the strong, independent woman, determined to make her own way in a male dominated society. 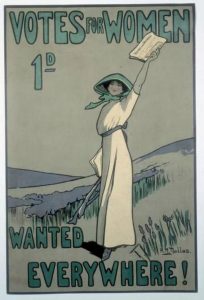 Margaret Haig Mackworth ran the Newport branch of the suffragettes, was a leading feminist and also combined her activism with a career as a distinguished journalist and business woman.”  Viscountess Rhondda was at the forefront of the Suffragette movement, both locally in Newport and nationally, and spent her life campaigning for gender equality.” She was sent to prison after posting a fire bomb which damaged mail in a postbox on Risca Road, Newport. She would not allow the £10 fine to be paid by her husband, went on hunger strike and was eventually released after five days without food.

In 1921 she set up the Six Point Group an action group that focused heavily on the equality between men and women and the rights of the child. The group’s manifesto of equal rights for women within the workplace, and for mothers and children, sought the following:

After her father died, Lady Rhondda inherited his title and attempted to take her place in the House of Lords but a male dominated committee prevented her from taking her seat there. However, due largely to her struggles, less than a month after Lady Rhondda’s death women entered the House of Lords in 1958.  Margaret Mackworth was a remarkable Welsh woman, not afraid to flout the conventions of her time and willing to take risks for her beliefs.