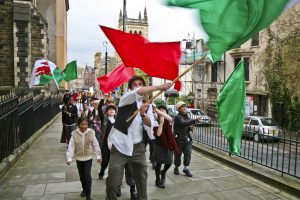 2017 was the 178th anniversary of the Chartist March to Newport in 1839 when more than 5000 South Wales Chartists marched on the town under the leadership of former Mayor John Frost, to support Six Points of petition to Parliament called the People’s Charter.  These Six Points are recalled in the masonry of the new steps leading from John Frost Square to towards the river.

To commemorate this event, six schools re-enacted the Chartist March down Stow Hill from St. Woolos to Westgate Square.  The schools met together at Clifton Park near St. Woolos Cathedral where the children were welcomed by the Mayor of Newport.  The procession set off for Westgate Square in cheerful fashion, chanting and waving banners, eventually reaching the Westgate Hotel where they enacted a Chartist poem, “Song of the Low”.  They were thanked by the Mayor of Newport who was delighted with the response of the children to this history through drama approach to learning.

The event was enjoyed by the parents of the children and by many passers-by who appreciated the efforts of the school children. This history through drama approach is a very effective way to bring the past to life and enable the pupils and members of the public to engage with history and appreciate their heritage more effectively. The Schools’ Chartist March is above all is an excellent opportunity for local children to learn about their city’s history in a fun, exciting and captivating manner.